Drag as a Tool For Self-Advocacy

Professor and performer, Donald C. Shorter Jr. talks with activist and social worker, Aleksa Manila about what it takes to stick up for yourself in the workplace and what skills can translate from ballroom to the boardroom.

MEDIA WITH IMPACT
Our mission is to use the power of media to educate, inform, entertain and inspire audiences everywhere.

FUN FACT: In the mid-2000's, Mx. Manila sang this song LIVE with world-renowned and Portland-based band, PINK MARTINI accompanied by bandleader, Mr. Thomas M. Lauderdale, back-up vocals with Mr. Timothy Nishimoto and with violin by Ms. Paloma Griffin during their live performance concerts from Peacock In The Park to the Crystal Ballroom.

collaborated with ALEKSA MANILA on this short video depicting immigrant roots and national pride from a FilipinX perspective.

The music is inspired by the song, "Bayan Ko" (My Country), one of the most recognizable patriotic songs in the Philippines that, because of its popularity, is sometimes assumed to be a folk song and the country’s unofficial national anthem. Originally titled Nuestra Patria in Spanish by the revolutionary general José Alejandrino; translated in Tagalog as a poem by Jose Corazon de Jesus in 1929, and set to music by Constancio de Guzman. Written as a protest song, it is often sung in protest rallies and demonstrations throughout Philippine history.

Aleksa is a genderqueer performer and multiple drag pageant winner who is also a therapist and healthcare worker. Since COVID-19 began, she has been offering virtual mental health therapy, working for the city of Seattle and, independently, in-person therapy with new safety protocols. One side of Aleksa’s office is her mental health practice, while the other half is where she does her virtual drag. How do these two vocations influence one another? This episode also introduces members of Aleksa’s drag family, The House of Manila, and underlines the connection of her life and work to the pre-colonial history of “Babaylan” transpiritual healers in Filipino culture.

This is the second episode of “Caretakers,” a four-part series on Filipino nurses and care workers in the U.S.PREMIERE: OCTOBER 21, 2021

Directed & produced by GEENA ROCERO for PBS: Chasing The Dream

​Watch the series via PBS

My journey to Seattle started in July 1995, just days after 4th of July celebrations. I had just turned 20, and so I was this wide-eyed brown boy excited to join my family in the US and was eager to be an "adult." As an immigrant FilipinX, my Philippine culture that includes both my ethnic background and religion, are very important to me. It's what makes up a big chunk of my identity. Because I migrated as a young adult, my childhood memories and much of my familial history is intact. And I feel proud that I am able to keep my brown identity in the forefront of who I am and what I do as a FilpinX-American and genderqueer person. A lot of the work I do (& not necessarily in my profession only) is centered on ethnic pride - be it with Pride ASIA, the Filipino Community Center, Legendary Children, UTOPIA or mainstream spaces where I'm reminded of being a minority, I get to join forces with other proud POCs to celebrate our diversity. I chose the Filipino Community Center for various reasons - primarily, it's the place where I was crowned as Miss Gay Filipino in 2001, my very first drag pageant where I won every category except for Miss Congeniality (insert laughter here). And beyond that, it's become a symbol of community for me - "bayanihan."

"Aleksa deploys humor and wit while challenging our biases
and raising awareness around the important issue of addiction,

which affects the LGBTQ community at a disproportionate rate."

"Aleksa taught me that you don't need a mask and a cape to be a super hero,
​although you might need some lipstick and mascara."

Geisha of a Different Kind - Race and Sexuality in Gaysian America​ 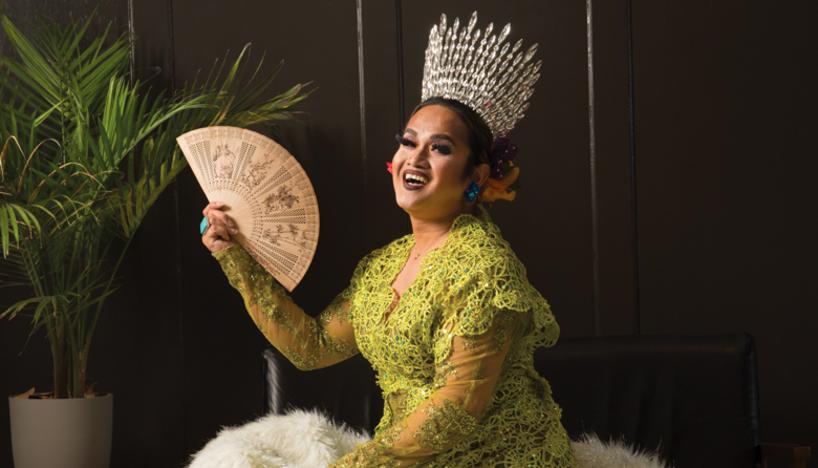