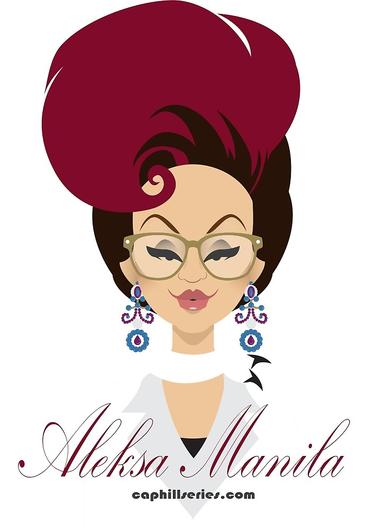 If you've come this far and still like what you see,
​book me for your special event! XO

"I had almost become reconciled to the contestants' mediocre acting and flailing limbs when Miss Aleksa Manila, the evening's formal entertainment, was introduced. Aleksa showed up all the ostensible performers with her powdered 18th-century pompadour, Disney-character makeup, and obligatory leather bustier. Here, finally, was a performer who could lip-synch with confidence and wiggle her ass with carefully coordinated abandon. When she demanded obeisance from her leathery court, everyone fell into line. The insubordinate cowboy could stand to take some lessons." - Annie Wagner, The Stranger, September 2004

"And then there was Aleksa Manila's number. She always puts on a great show, but this one was exceptional. Dressed in traditional Kimono she came up on stage to the song 'Dont'cha wish your girlfriend was hot like me' and stripped down for action. Normally people come up from the audience to give Aleksa dollar bills, as a form of tribute (I don't actually know the history behind this and I feel like I should-- if someone wants to enlighten me, please do..) but this time, she was tossing their bills aside. She didn't want money, she wanted -victims- and Tony Buff was her first choice. Then towards the end, Barry decided he wanted some of that action too, and wedged himself up between Tony's legs. What can I say? Wax on, wax off!" - Malixe, Malixe Live Journal, September 2005

"Act two began with Olympia XXXV Aleksa Manila and a production number with pallbearers carrying her mummified self to “Sweet Dreams” by the Eurythmics. They lowered her body, and suddenly she came to life, ripping off the mummy rags and illustrating the lyrics, “some of them want to be abused by you,” by supposedly pulling a candle from the ass of one of the leather-clad servants; lighting and pouring hot wax on another; and digging her heels into still another. After flogging one of her temple priests, she made all of them form a human divan that she could lounge across." - Sister Dana Van Iquity, San Francisco Bay Times, March 2006

"When approaching Empress Aleksa, a drag queen dressed in an attention-getting gown and foot-high crown who is carrying a huge jeweled scepter, one might expect some serious regal attitude. Instead the Empress stops, makes direct eye contact and holds a reporter’s hand while he speaks of his virtually 24/7 commitment to serving the gay community. In fact, his day job is a health care educator for Seattle Counseling, a gay and lesbian counseling service." - Lois Elfman, Scene Magazine, April 2006

"Imperial Court members are asked to walk the runway that goes from the stage through the ballroom as their names are called. No one received a bigger reaction than Seattle Empress Olympia XXXV Aleksa Manila. With a plunging neckline covering a scant bikini top (not sure how he made the cleavage), a skirt cut thigh high, a five-foot tall jeweled scepter and a foot high crown known as “the lampshade” (because it was made from a lampshade), jaws dropped when this Empress went by." - Lois Elfman, Falls Church News Press, May 2006

"Aleksa thanks for all you do for me and everyone. " - Reichen Lehmkuhl, September 2006

"This year's ball promises to be one of the better ones to sample because it was created under the guidance of outgoing empress, Aleksa Manila, one of the best drag performers in town. (That quality, unfortunately, is rarely the primary reason they select an empress. Fortunately, Aleksa also is a wiz with fundraising and community service.)" - Tacky Tourist Clubs of America, Cruise News, February 2007

"Not only is she beautiful but she has a very generous heart and endless enthusiasm for serving our community. Her tireless work is always performed with utmost grace and style." - Ann McGettigan, Executive Director - Seattle Counseling Service for Sexual Minorities, February 2007

"I thank Empress Aleksa Manila for the outstanding work she and the Court have done to improve the lives of LGBT people in Washington State." - Marsha Botzer, Founder - Ingersoll Gender Center, February 2007

"It is impossible to convey how caring and loving of a person you are. I am in awe of how organized you are and how much I look up to the leadership you display in your life and in the community of Seattle. Your unyielding strength and class to express who you are is an asset to me as your friend and serves as an example to us all. Thank you for being you." - Reichen Lehmkuhl, Actor, Author & Activist, February 2007

"Over the many years that I have been privileged to call Aleksa my friend, the love and support that she has shared with me has been unparalleled. She has taught me well how to control my men and wear my crown proudly. For this I thank you my sister from the bottom of my heart." - Kristine W, International Recording Artist & Musician, February 2007

"I want to personally say thank you to you Aleksa for your friendship. You are an unbelievably wonderful individual. Your special guest star performances with Pink Martini have brought down the house up and down the West Coast. I thank my lucky stars that we met in the Silverado bathroom in Portland, Oregon late one night four years ago. It is an honor to know you and to have you perform with us." - Sir Thomas M. Lauderdale, [Baron of Beaver - Imperial Muse to Olympia XXXV] Band Leader - Pink Martini, February 2007

"The hostess for QueerFest at Volunteer Park that afternoon was Aleksa Manila, one of those drag-queen names you keep saying over and over to yourself thinking there must be a pun in there somewhere you’re not catching. She was witty, quick-thinking, and of course looked fab." - Gavin Borchert, Seattle Weekly, June 2007

"Empresses Robin Kradles, Anne Tique, Trai La Trash, Panzi, Aleksa Manila and Verna Turbulence are my new sheroes. I still idolize traditional female icons such as Madeleine Albright, Billie Jean King and Golda Meir – those women created change in the world. But my new gal pals have created a change in me. They have shown me you can be feminine and ornate while also being smart and caring. And they have taught me to not be afraid to express myself. I am bolder for knowing them. I also picked up some makeup tips: For example, if you put a little powder on your lips before you put on your lipstick, it stays in place better." - Lois Elfman, Strut Magazine, December 2007

"I think you do a great job as an MC – You are a very gracious host/hostess – and I was quite intimidated to follow your class act!" (Greater Seattle Business Association Awards) - Gary Tucker, Pacific Northwest Ballet, March 2008

"Aleksa - wow! Thank you so much for donating your time and incredible talents to the gala..." - Michal Wiesbrock, Equal Rights Washington, March 2008

"After that opener, Lauderdale sat down at the piano and rehearsed the Philippine protest anthem Bayan Ko with drag star Empress Aleksa Manila, whose voice was the most lilting instrument imaginable." - Tom Austin, Miami Herald, March 2008

"Thank you again for all your amazing work in 2009. I'm so happy to be working with you again in 2010." - Maura Smith, Gay Bingo Event Coordinator, Lifelong AIDS Alliance, December 2009

"Thank you for taking your valuable time to make Snowball a success again. Your beautiful and vibrant presence makes the event!" - Breanne Anderson, Board President, Ingersoll Gender Center, January 2010

"Aleksa is our new QUEEN of EVERYTHING!... Remember, we are your northwest corner of Washington FAN CLUB!" - Cathy Pfahl, GSA Advisor, Mt. Vernon High School, February 2010

"My god - you never stop - one of the the STARS of the LGBT Communites in the North West. And damn good at it, to boot!!! AND glam to the max." - George Bakan, Editor/Publisher, Seattle Gay News, February 2010

"Are you thinking it just can’t get any better?  Imagine our surprise as we opened Sunday’s edition of the Skagit Valley Herald only to find a large color photograph of drag queen Aleksa Manila above the fold!" - Michael Bonacci, Pride Foundation, February 2010

"She has such an awe-inspiring connection with the community, as well as a great heart." - Jonathan Mathews, Kwanchai Design, February 2010

"You are the best hostess with a great heart!" - Quyen Luu, Cafe Metropolitain, March 2010

"You are awesome! The Mount Vernon High School GSA thought you were extremely fabulous. Your articulate and knowledgeable  presentation at the Queer People of Color workshop was extremely important for the education aspect of the Over The Rainbow Festival... and we don't feel our festival would have been nearly as good without you." - KC Bridges, President, MVHS Gay Straight Alliance, March 2010

"The evening’s hostess, Aleksa Manila, is clearly several classes above most of the other performers. She handled the show’s rough spots with grace, poise, and good humor. And there were more than a few rough spots." - Evoë Thorne, http://wholesexlife.com/blog/, Spring 2010

"I am a big fan of yours since I was 15 years old until now! I look up to you...you embody glamour, and you serve it up all the time! You paved my way in drag...and I couldn't thank you more enough!! Maraming salamat po!" - Atasha, Inay's, October 2010

"You were wonderful as always. It was great to see you working with our young LGBTQ leaders - modeling MCing! Thank you for all you do to support our community. You are truly a (s)hero!" - Lisa Love, Seattle Public Schools

"You are an amazing and tireless advocate for our community and I absolutely enjoy working with you on (how many projects? I've lost count) so many community events. It really meant a lot to me that you showed up last night at the Marriage Equality Gala because, in your words, "I had to be here." We always say, "Aleksa Manila does so much work for the community" because it is true. But I want you to know that I've stood back and watched and realized that most people really don't know exactly how much you truly contribute to issues from marriage equality to recovery to gender issues and beyond. Thank you." - Shaun Knittel, Associate Editor - Seattle Gay News 2012